Old Habits Die Hard: Breaking Up with the GDP 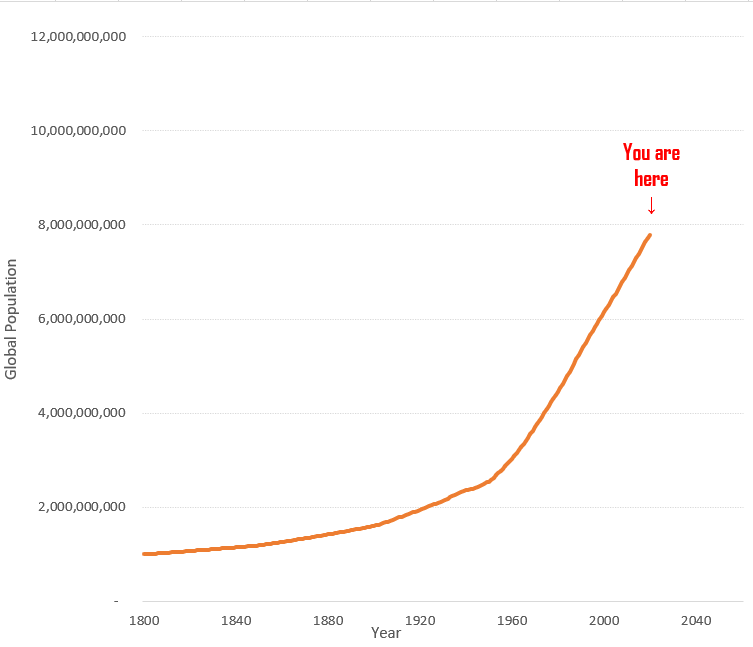 Readers of this column are likely well aware of the dangers of continued population growth and how difficult that can be to discuss in the mainstream. Even less often discussed is the related notion that the economy cannot grow forever. Since WW2, the U.S. Government has been measuring our economic success by the amount by which the economy grows. As long as it keeps getting bigger, all is considered well.  If the economy gets smaller, we are said to be in recession.

Gross Domestic Product (GDP) is the metric used to measure economic growth. GDP adds together all the consumption of individuals, businesses, and the Government plus net exports. There are a number of factors that drive GDP growth, but a key factor is population. The more people we add, the more consumers we have, the more the economy grows. Anyone paying attention can see there is a cliff waiting for us. Economist Kenneth Boulding famously testified in front of Congress in 1973 that “Anyone who believes that exponential growth can go on forever in a finite world is either a madman or an economist.” Almost fifty years later, this realization still hasn’t made it to mainstream thought.

The good news is that a number of GDP alternatives have recently been proposed. Most famous is probably the “Gross National Happiness Index” in Bhutan. The bad news is that none of these alternatives has gotten any momentum in the U.S. and it’s hard to see any of them being accepted by Wall Street as a true alternative to GDP. Most rely on survey-based methods of measuring social factors such as happiness, which is notoriously difficult to evaluate. And since when has Wall Street cared how happy we are or how many resources we have left to feed the machine?

No metric will ever be perfect. GDP itself is far from perfect – it counts prescription pain medications, the cost of cleaning up oil spills, operating prisons, and plenty of other expenditures that we would not like to see grow. Perhaps we don’t have to go reinventing the wheel though—we could get started with other metrics which already exist such as:

If we look at the unemployment rate and the GINI ratio together, we can get a pretty good picture of our prosperity regardless of whether the population is increasing, decreasing, or stabilized over time. These metrics remove the importance of growth and even change the focus from consumption to income, where it should be. As the saying goes, “what gets measured gets done.” How are we to protect our future economy from environmental constraints if we keep focusing on growth alone?

Most importantly, how do we actually break the habit of expecting GDP to grow forever? How do we get our government, the financial community, the media, and ourselves trained onto new metrics?  Here are a few suggestions:

Notice every time you hear or read the word “growth." It should be a red flag word, a word that makes us stop and question the quality and cost of growth. Growth by itself is not always bad, but for too long we have assumed that it is always good.

Pay attention to the unemployment rate.  The U.S. Government announces it the first Friday of every month. Currently the U.S. Government has no routine report of income inequality. We should advocate to change that.

Look back here for future discussions of GDP alternatives being discussed around the world.

Write to us at info@earthovershoot.org with your own thoughts and ideas.

Amy Burkholder Tschudin is a financial professional based in the Washington, DC area.