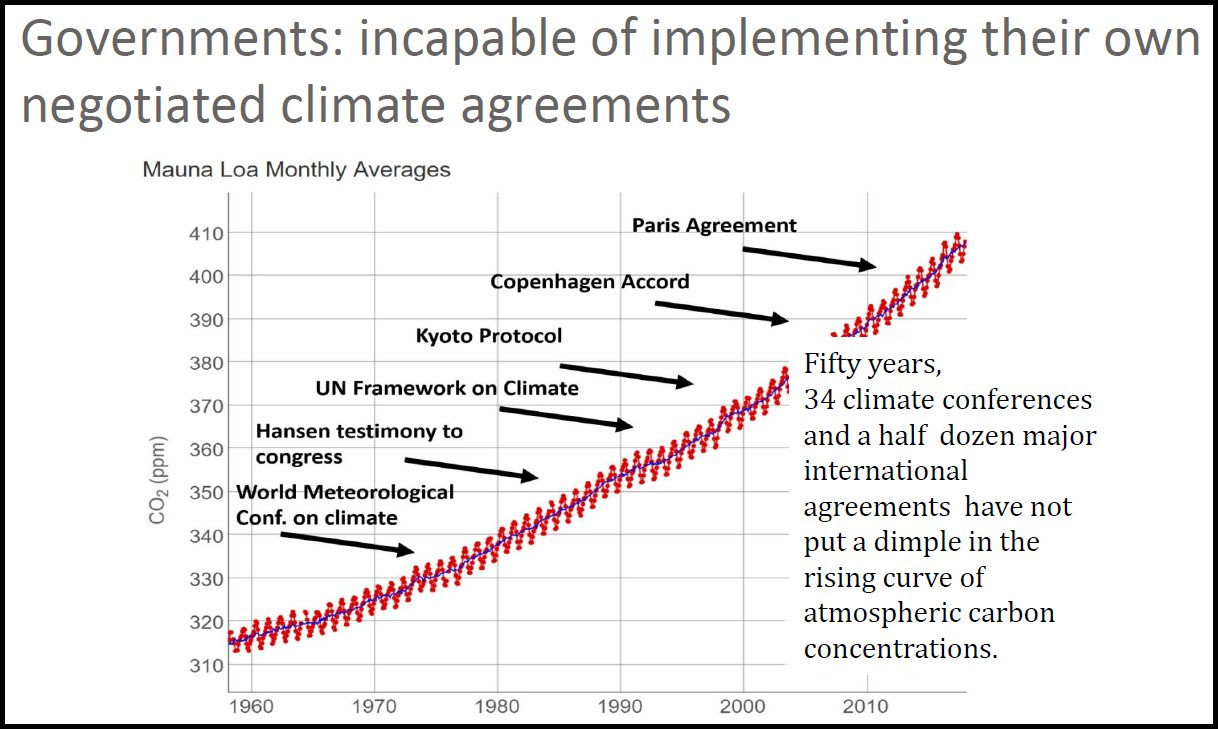 One of the first cabinet-level  appointments Joe Biden made was that of John Kerry in the newly-created position of “Climate Czar.” This is promising. Putting a person with such international stature and experience instantly communicates to the world the priority the new Administration places on addressing a very serious threat to the health and welfare of the planet. Whether Kerry, Biden and the United States can truly make a difference in heading off catastrophic environmental collapse due to the warming planet will depend upon approaching the problem with a “big picture” mentality and rallying Americans and the citizens of the world at large to embrace change despite the hardships they will require in the pursuit of long-term sustainability.

Our climate emergency is very serious. Over the previous 50 years there have been more than  34 climate conferences and six major international agreements that have done absolutely nothing to slow down our escalating consumption of fossil energy and its resulting emissions. Why? Because 7.8 billion people want all of the benefits of modern society that fossil fuel has generated, from the houses we live in to the cars we drive to the healthcare we use and the food we eat. And because we rely on fossil fuels for the relatively inexpensive extraction, manufacturing, assembling and delivery of our most essential goods and services, we are largely willing to ignore and overlook their ugly side: the environmental destruction of the planet. This situation is often referred to as the “Tragedy of the Commons.”

World leaders can come together and craft something lofty, but the real challenge is to take these idealistic goals and successfully implement them within the economic, cultural, social and political constraints of one’s own country. People at all economic levels have demonstrated great resistance to anyone, including politicians, that make their lives more expensive. When goods and services become more expensive, growth invariably slows, economies can go into a recession, and people suffer, protest and demand change.  A tax on carbon may make all the sense in the world to slow its consumption but when higher energy prices drive public protest and strong arm tactics by the energy lobby, do our leaders have the strength to hold firm?

And in the background of all of these ill-fated and ineffectual measures to address our fossil fuel habit, we continue to add 80 million more people to the planet every year emitting enormous amounts of CO2.  It’s no wonder that BP estimates energy demand will soar 30% by 2040, and even though half is expected to be non-carbon based energy, the other half will come from fossil fuels.

So what can John Kerry, our new Climate Czar do that 1) is politically achievable that doesn’t tank the economy  2) doesn’t accelerate economic activity that will inevitably destroy more of the environment, and  3) doesn’t layer on more unsustainable debt that undermines our economy as well as our future security?

That is a tall order. If Mr. Biden had tapped me as his diplomat to fix climate change and  negotiate an end to this war humanity is waging on nature, here is what I would advise:

Implement  a Carbon Tax. Citizens will not like paying more for goods and services but, if phased in gradually and done so in a way that unites us behind a common cause, we can wean ourselves off carbon-based fuels and not destroy the economy in the process.

Implement a Luxury Tax. In just one cross country flight on his Gulfstream V, Mr Kerry, burns over 11,000 pounds of jet fuel emitting 35,000 pounds of CO2 into the atmosphere, the equivalent of what three average global citizens rely on for all their needs over an entire year. Luxury items are typically resource-heavy and carbon intensive to make and are extremely damaging to the environment, and it is the right thing to do to curtail such profligate waste of limited resources.

With the revenue from these first two policies:

Pay Down our Debt which will give our lawmakers the flexibility in the future to better withstand economic downturns or shocks.

Implement Greenhouse Gas Removal or “capture technologies” to lower CO2, methane and other climate change-causing gases from the atmosphere.

Build Out the Grid Infrastructure to manage significantly greater electric generation as a result of decreased fossil fuel use.

*Create a Task Force of highly qualified scientists to study the carrying capacity of the United States. Based on energy use and the  vast amounts of other critical minerals, metals and renewable resources our nation consumes, determine a  population level that can live sustainably within what our country can provide.

*This last recommendation is the most important, because as our global numbers grow the implications and risks to our freedom of choice and our sustainability grow worse.

Fixing climate change ultimately won’t slow down our demand on, and destruction of nature. I would be a failure as a citizen of this country and as a concerned member of the global community, and Kerry will fail as President Biden’s Climate Czar if we focus our efforts solely on the symptom of climate change and not the underlying disease that causes it and every environmental emergency facing our planet.