Conservation: The New Normal is the Road Less Traveled 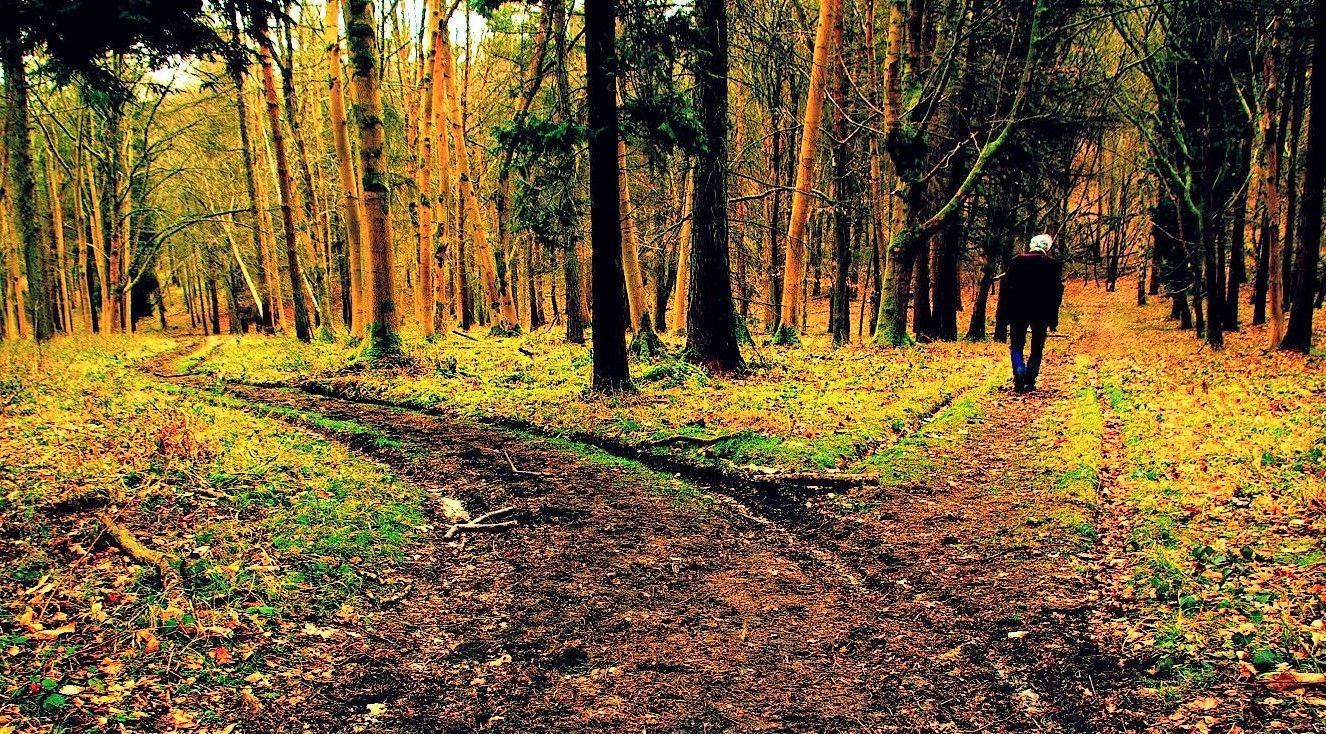 Symbolically, someone who takes “the road less traveled” has come to mean a person who acts independently, is free from the conformity of others, makes their own choices, and perhaps leaves a new trail that could become the road more often traveled. Many are familiar with the celebrated poem by Robert Frost, “The Road Not Taken," where this famous line comes from. The road less traveled might not be an easy road, it might be full of potholes, bumps and lots of uncomfortable, stressful, things.

On the flip side, people often choose the easiest paths through life because it’s simply less work, hassle, and it seems like it would free us up from a lot of the uncomfortable stuff of life. Many choose to be part of the group, and adhere to the social norms and expectations of families/friends/trending culture/political affiliation/religion/work environment (“the group”), and avoid the perceived, or real problems, that can come along with taking the road less traveled. Social norms, or what’s considered “normal”, are: “the written or unwritten rules that describe what a certain reference group considers to be typical or desirable behavior in certain contexts”. Norms keep societies functioning by providing rules, laws and expectations -- spoken and unspoken. Even in modern-day cultures, those who don’t follow expected norms can suffer disapproval or be rejected by “the group.” So, when people know what’s expected of them, they tend to comply.

Here’s the thing, some norms -- things our groups think are a good idea – sometimes turn out to be just the opposite. Cigarette smoking used to be a social norm. Lighting up a cigarette in many settings decades ago would have been expected; now it’s almost unthinkable. Child marriage -- any formal marriage or informal union where one or both of the parties are under age 18 – is, regrettably, a social norm in some parts of the world. Slavery, racial discrimination (e.g., segregation), and sexual discrimination (e.g., women can’t vote and shouldn’t work) used to be social norms in the United States. Obviously, not all norms are good, fair, or humane. In fact, we now know that some of our past accepted and expected beliefs and practices were basically inhumane. So, what happened to restrain and change these norms? One person, somewhere, took the road less traveled and created the space to change the norm. Through work and conviction, beliefs and norms that were mistaken or no longer serve us well, can and have been remedied.

Globally, many cultures and countries have embraced norms for environmental conservation and sustainability. As my former employer, the United States Environmental Protection Agency defines it: “Everything we need for our survival and well-being depends, either directly or indirectly, on our natural environment. To pursue sustainability is to create and maintain the conditions under which humans and nature can exist in productive harmony to support present and future generations.”  Sustainable economies and lifestyles help us manage the impact of global climate change. Recycling is a social behavior (norm) that many of us engage in and promote to support sustainability. Other examples of sustainable behaviors include living car free, walking or biking more, eating plant-based diets, using renewable energy (wind, solar), consuming and buying less, and conserving water, among others. These are good practices and social norms. However, there’s significantly more to effective resource sustainability. There are a few groups bold enough to recognize what more is needed, to talk it about candidly, and lead us to the road less traveled.

Here's Earth Overshoot’s answer to a question a lot of us have.

“Is overpopulation really a problem? Based on current world affluence or wealth times the number of people on the earth, measurements indicate humans as a species are far exceeding earth’s ability to provide us the necessary resources without adverse effects to all living creatures. In fact, we would need to reduce global wealth and economic activity by half if we are going to live sustainably and allow for the abundance and diversity of life to flourish. Getting people to reduce their wealth voluntarily to a sustainable level is not happening. In fact, world bank data cites a 4% average annual growth of the world economy (GDP) since 1961, so we must be honest and address this reality, and the environmental benefits that come from growing smaller gracefully.”

The four actions that most substantially decrease an individual's "carbon footprint" -- in simplest terms this means your contribution to harmful air pollution -- are: (1) eating a plant-based diet, (2) avoiding air travel, (3) living car-free, and (4) having smaller families. Importantly, having one less child is the most effective means of decreasing your contribution to harmful air pollution.

The truth can be hard to hear and sometimes makes us uncomfortable. This kind of truth – overpopulation – might make a lot of us really uncomfortable. This is the uncomfortable stuff we encounter on the road less traveled. It might feel like an attack on our moral/personal/religious values and choices about family and children. Those who love the children in their lives, can’t imagine life without children, those who want children someday, and those who’s culture or religion expect or direct its members to have children, might find this overpopulation topic unbearably difficult or impossible to support. It's understood if that’s you. Earth Overshoot, and other organizations working to educate on sustainable population growth, have created a space and opened a door to discussing and working to fix a problem that’s kept secret and routinely ignored by those with the power to bring about meaningful change in the health of our environment.  A livable world for all people means less people. There are many myths about parenthood, just like there were about cigarette smoking.  We can grow smaller gracefully, without fear, shame, or blame.

In modern Western cultures, like the United States, social norms about having children, whether and when to have them, have changed in the last several decades. Widespread availability of contraception, the right to choose when and if a woman wants to become a parent, and educational and work opportunities that allow for independent living, are all factors in new social norms about parenthood. Whether by choice or circumstances about 1 in 6 US women live their lives without children, and nations around the world report comparable numbers. In most societies, and for most of human history, choosing not to have children was both difficult and undesirable. Here’s a few interesting facts about the growing new norm of non-parenting:

“…just as parenthood is not a monolithic experience that affects well-being, childlessness is not the same experience for all individuals. The available evidence suggests that childlessness has few costs for psychological well-being and may even be associated with enhanced well-being, at least for certain social groups.” SOURCE: Parenthood, Childlessness, and Well-Being: A Life Course Perspective

“Social contexts shape the meaning, experience, and consequences of childlessness in ways that may undermine well-being for some select groups (e.g., young women facing infertility and older unmarried men). Parenthood is increasingly viewed as a matter of choice, and voluntary childlessness has become more common.” SOURCE: Parenthood, Childlessness, and Well-Being: A Life Course Perspective

TRANSLATION – More and more people are voluntarily choosing not to have children. How you view being a non-parent depends on where you are in your life. If you’re an older unmarried man without a social network of friends and activities, or if you're a young woman facing infertility, being a non-parent may be difficult.

“As for childlessness at midlife, Koropeckyj-Cox, Pienta, and Brown (2007) analyzed national, cross-sectional data to compare the well-being of childless women and mothers in their 50s and found that childlessness was not associated with worse psychological outcomes in midlife. It was women who became mothers early in the life course who experienced lower wellbeing—largely because of marital disruption and fewer socioeconomic resources.”  SOURCE: Parenthood, Childlessness, and Well-Being: A Life Course Perspective

“A theme of the 2000s is that parenthood, per se, does not predict well-being in a systematic way. The way children turn out and succeed or fail in socially desirable roles is related to parents’ psychological outcomes and self-concepts.” SOURCE: Parenthood, Childlessness, and Well-Being: A Life Course Perspective

TRANSLATION – Being a parent doesn’t make you happy. A parent’s psychological state and resources can impact how your children turn out.

“The strains of parenting are not distributed equally—with women, unmarried parents, and lower [socio-economic-status] SES individuals shouldering more strain and its consequences. Recent work calls attention to the burden of parenting in American society and the absence of public support for parents and children (Hewlett et al., 2002). SOURCE: Parenthood, Childlessness, and Well-Being: A Life Course Perspective

TRANSLATION – Women have to do the most of the parenting work. The strains of parenting are particularly hard for the unmarried and those with less financial resources. American society (work environments, family structures, public policies) do not fully support parents and children.

The web platform, “Meetup” has an entire section on “Childfree groups”. There are 150 Childfree groups worldwide with over 38,000 members.The Childfree groups on Meetup openly announce their rules for who can and should join their meetups. One example: “This is an inclusive group (any orientation, race, and 21+ age) for childfree couples and individuals (whether childfree by choice or by circumstance) who are looking to expand their social circles. Make friends with other non-parents for fun and supportive non-kid-related conversation, usually over lunch or dinner.”

The organization “theNotMom” has a website, annual summit, and social media presence on Facebook, and Twitter for and by women without children. This powerhouse of fresh perspective and resources on being a “NotMom” is unparalleled. A section of their web site displays the photos of well-known female actresses, media personalities, or other successful public figures that, by choice or chance, don’t have children; “Women You Know Today, With Stories Like Yours.”  The founder, Karen Malone Wright, says about the organization: “We need more spaces where women who don’t have kids, whether they define that as a choice or not, can talk about and celebrate their lives without fear of judgment or reprisal.”

Through work and conviction, social beliefs and norms that were mistaken or no longer serve us well, can and have been remedied. “Everything we need for our survival and well-being depends, either directly or indirectly, on our natural environment. To pursue sustainability is to create and maintain the conditions under which humans and nature can exist in productive harmony to support present and future generations.”  A livable world for all people means less people.  Having no children or one less child, whether by choice or chance, is believed to be the most meaningful action to address climate change and impact environmental sustainability. Those that have or will make the choice for smaller families are anonymous, hidden heroes, in a parent-centric, often harshly judgemental world. This is the road less traveled. We can grow smaller gracefully, without fear, shame, or blame. It’s already happening. In the population game, the team that recognizes that their well-being is connected to the well-being of their environment, wins.

“I shall be telling this with a sigh
Somewhere ages and ages hence:
Two roads diverged in a wood, and I—
I took the one less traveled by,
And that has made all the difference.”

Robert Frost, The Road Not Taken

Selfish, Shallow & Self-Absorbed: Sixteen Writers On The Decision Not To Have Kids, Meghan Daum, Ed., 2015; https://www.meghandaum.com/selfish-shallow-self-absorbed