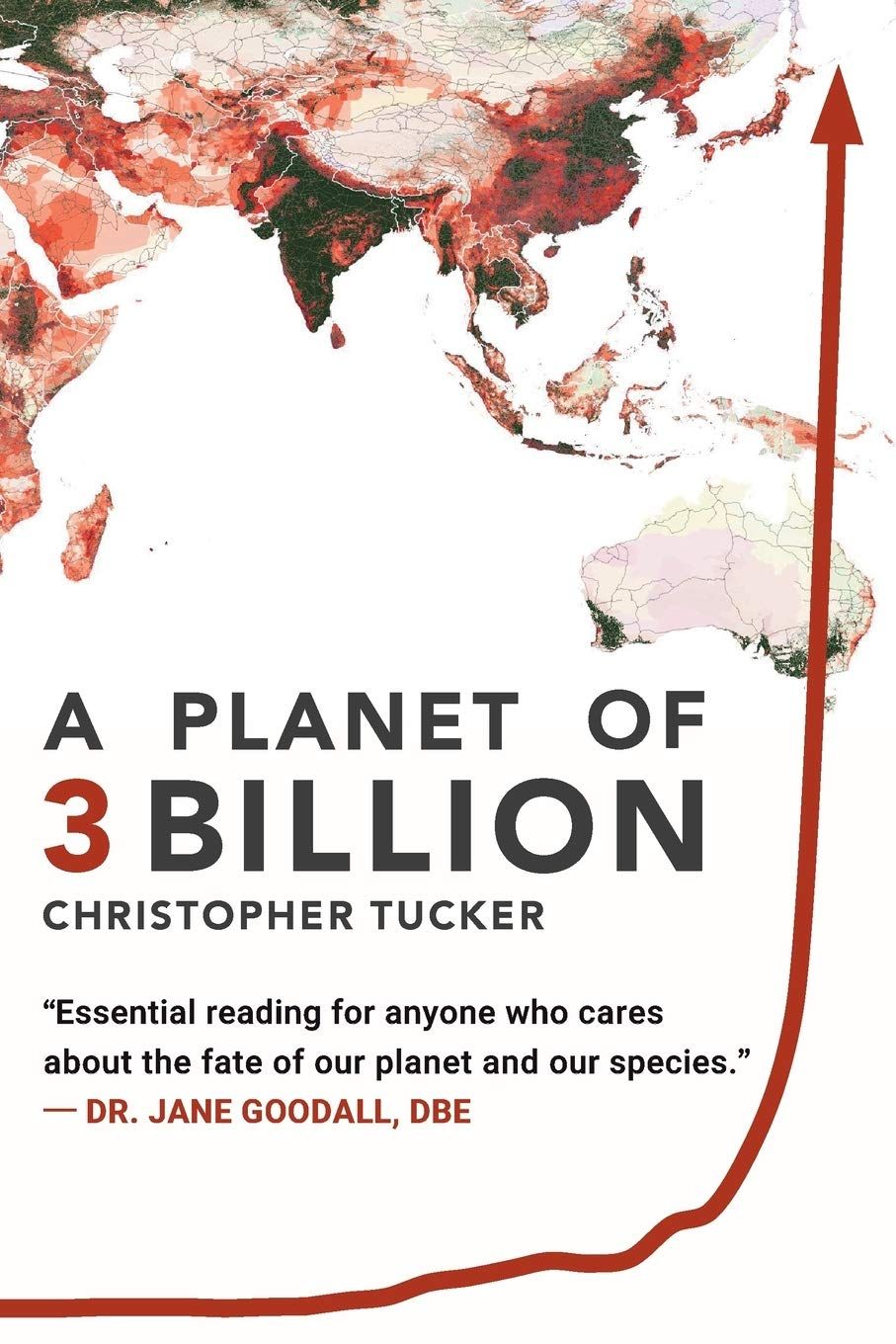 “An organism no matter how benign alters the environment in which it exists.”

The world is a pretty big place. 36 billion acres of land, three times that on the ocean surface and everything on it and below it make up our living planet. Can one organism become so prolific, so dominant that it can alter such an enormous environment to the point that it threatens not only its own existence but pretty much all other existing life?

In his book, A Planet of 3 Billion, Chris Tucker deftly illustrates humanity’s march across the planet, overwhelming the earth and its capacity to absorb our impact. As the book’s title suggests, Tucker postulates that a planet of 3 billion homo sapiens may keep us within those boundaries and allow us and other species to flourish indefinitely.

Tucker’s background and knowledge cover a wide range of disciplines from geography, to technology, cartography, national intelligence and security. Using statistics, graphs and maps, he details humanity’s path of destruction revealing that our emergencies are not limited to one symptom like climate change, but are far more profound and what this critic would characterize as a “Human Impact Crisis”.

Tucker describes the magnitude and complexity of this crisis in one natural system, the ocean:

The ecological devastation that modern industrialized humanity has unleashed on the world’s oceans is nearing the farcical. Some 100 million sharks killed each year for fins to put in soup. Whales hunted to the brink of extinction, under government subsidy, for their meat, though it is largely disliked. Five continent size garbage gyres unleashed on the wildlife and food chains of our high seas. Hundreds of hypoxic low oxygen “dead zones” that are growing every year. Massive reef die-offs due to changing ocean temperatures and acidification. Invasive ocean species being transported inadvertently around the world, causing billions of dollars in devastation. And biogeochemical pressures being put on the very  phytoplankton that generates some 80% of Earth’s oxygen.

He gets to the heart of the problem succinctly: “The more humans there are on the planet, the more of the planet must be industrialized.”

The one point that I felt could have more fully explored is the role energy played and continues to play in humanity’s explosive growth. While the author points to industrialization as the main driver of explosive growth both in our levels of consumption and in our numbers, this process could only have occurred with an abundance of inexpensive, highly dense and portable energy. The concentrated fossil energy we discovered underground and harnessed commercially gave us the ability to build machines that could move forests, rivers, lakes and mountains, extract  resources and generate waste to an extent that would have been impossible otherwise.

Today, renewable energy is the “cure du jour” for a public looking for a relatively quick and painless fix to climate change and other environmental degradation brought on and exacerbated by our species’ addiction to fossil fuels. Tucker’s book offers much that will disappoint those fantasies.

And for those people who blame  consumption and not population as the source of our planet’s problems, “A Planet of 3 Billion” offers a thorough and balanced response explaining how 8 billion people, no matter how gently we try to live, will ever be able to fully achieve sustainability. The sooner we acknowledge everything has a limit, including our own species, the less suffering there will be for all life on this planet.