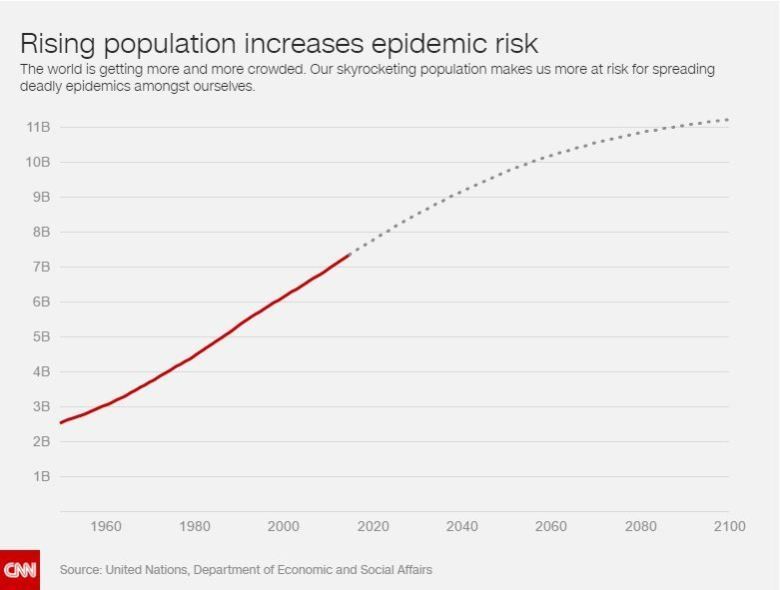 For millions of years, nature has kept the numbers of human beings and other living creatures in check.  When a species exceeded the carrying capacity of its ecosystem, natural processes like starvation and disease occured to force the situation back into balance. All of that changed, for humans at least, in the last two centuries. What happened?

Fossil energy has literally and figuratively fueled the extraction of prodigious resources, the specialization of work, and the invention of technologies so effective at boosting food and water supplies and countering disease outbreaks that humanity’s numbers exploded across the globe. The Ebola virus that struck West Africa in 2014 killed more than 11,000 people and would have killed many more were it not for the healthcare personnel, transport, communication, and medicine made by possible by fossil fuels -- from cellphones and planes, to medicines and protective equipment. The recent outbreak of Coronavirus follows a growing string of devastating health emergencies resulting from viral outbreaks such as West Nile, SARS, HIV, Ebola, Swine Flu, Avian Flu, MERS.

Are we seeing more frequent and dangerous viruses and, if so, why? How long will we be able to prevent or contain more such outbreaks before we experience a full-blown pandemic?

If we continue to add 81 million people more to the planet every year, the answer is clearly no.

"There's a strong correlation between the risk of pandemic and human population density. We've done the math and we've proved it," said Dr. Peter Daszak, a disease ecologist who co-authored a 2008 study  published in the journal Nature.

The study connects emerging diseases with an increase in humanity’s footprint. Looking at contemporary outbreaks since the mid-20th century, Daszak and colleagues found that the rate of emergent diseases caused by pathogens new to humans has increased significantly with time, even when controlling for progress in diagnosis techniques and surveillance, which could make it only seem like diseases were on the rise. More than 300 new infectious diseases emerged between 1940 and 2004, the study found.

When there are more people and more economic activity there is  more encroachment into the environments where contact with the pathogens is more likely. In fact, the study found that 70% of the diseases contracted by humans originate from wildlife. In addition to more frequent infections, denser areas of the human population are intensifying the spread of these diseases as more people crowded into finite areas are exposed to diseases that can be easily spread by a touch, a cough or in someone’s drinking water.  And thanks to affordable modern travel, a disease that is in Wuhan today can be in New York City tomorrow.

As the stakes grow, we can not keep rolling the dice relying on technology and other resources enabled by fossil fuels to help us dodge future viral pandemics. The surest path forward for humanity to limit these risks to our health, society and economy is for us to take immediate steps to bring our human numbers down in a manner that both respects human rights and nature’s attempts toward balance.